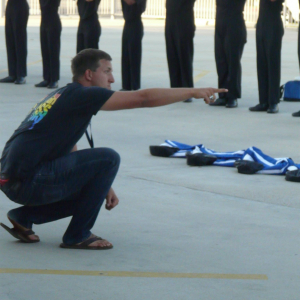 Taylor attended Riverside Community College after high school and participated in the Jazz "A" Band, Wind Ensemble and the world famous Marching Tigers. He was a soloist in 2008, and was the featured trombone soloist in 2009 with the Marching Tigers. After receiving his Associates Degree, he transferred to California State University, Long Beach in Fall of 2012. Taylor is now a Music Education and Jazz Performance major and a member of the Concert Jazz Orchestra directed by Jeff Jarvis, Symphonic Band directed by Jeremy Arnold, and the Jazz Lab Band. He currently studies privately with Bob McChesney and Steve Trapani.
Taylor also played Euphonium as a member of the 2010 and 2011 Blue Devils "A" Drum and Bugle Corps. In 2012, he taught visual at Pacific Crest Drum and Bugle Corps and in 2013 with The Blue Devils "B" Drum and Bugle Corps. Since 2014, Taylor has been teaching visual at The Blue Stars Drum and Bugle Corps. Taylor has worked at Upland High School, Mater Dei High School, Alta loma High School, and is currently his 5th year as Visual Caption Head at Colony High School. This is Taylor's second year teaching music and visual at Chino Hills High School, and Edison High School.
He currently resides in Naples,Long Beach, CA and is the current Associate Director of Instrumental Music at Mater Dei High School and the Director of the Music Academy.
See photos of Taylor
2013
2011
2010