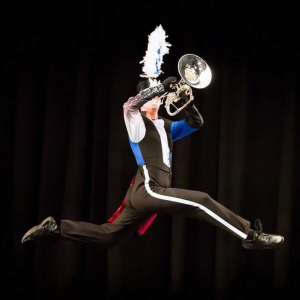 Michael Samson marched in the Blue Devils 'A' corps for four seasons (2010, 2012-14). In 2013-14 he had the honor of serving as Mellophone section leader, and in 2014 was awarded the distinction of Brass Member of the Year and Outstanding Mover. He also marched in the Blue Devils 'B' corps in 2009, helping them secure their first ever Open Class championship. His life in the marching arts began in the Vallejo Middle School marching band and indoor drumline, under the guidance of Merlin Chestnut.

As a teacher, Michael has provided instruction in music, movement, and marching with Ayala High School, Fountain Valley High School, Downey High School, De La Salle High School, Rosemead High School, and Broken City Percussion. Working with the Blue Devils 'B' corps this summer is an exciting opportunity to view the crazy world of Drum Corps from the other side, and to give back to the organization that has given so much to him.
See photos of Michael
2016
2015
2014
2013
2012
2010
2009