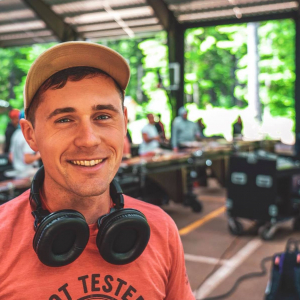 Tim Mitchell has served in development of the Pacific Northwest marching arts scene beginning with the startup of his company in 2016. Tim has worked locally as a Sound Designer and Audio Engineer, coordinating the development of sound reinforcement and audio playback techniques to help scholastic programs compete nationally within the fast-paced development of electronic implementation in the marching arts activity. Tim brings experience from his time engineering for former and current DCI corps Oregon Crusaders, Seattle Cascades, and Columbians.

Tim learned audio engineering through radio and film production at Central Washington University, creating and co-producing nationally-awarded podcasts and promotional material under the mentorship of seasoned radio veteran Travis Box. During his time at KCWU-FM, the station was recognized and awarded at the Intercollegiate Broadcasting System conference in New York City (2015) and the College Broadcasters Incorporated conferences in Seattle (2014) and Philadelphia (2016).

Tim worked on the production team for Discovery Channel’s “Amanda to the Rescue” - recipient of the Humane Society's 2019 Genesis Award for Outstanding Reality Series. He interned at REX Production and Post in Portland, Oregon, assisting with a variety of full-length documentary projects, short films, and independently produced music recordings. Tim served as Production Assistant and Audio Field Recorder for “Behind the Bullet” - the Oregon Independent Film Festival’s 2019 recipient of the “Best Documentary” award.

As an educator, Tim is certified in Career & Technical Education in Washington State and taught Digital Media courses for West Valley School District’s “FUTURES” program from 2019-2021. As a member of the Yakima Valley CTE Regional Advisory Board, Tim worked with teachers to reframe curriculum standards to the ever-changing industry of media production, pulling from his experience as a freelancer in the media industry.

Tim brings creative experience from his career as a freelance Sound Designer for marching arts programs. Serving over 200 scholastic programs nationally in the field of sound design creation and implementation, he has published arrangements in collaboration with Jeff Chambers Music, Marching Show Concepts, Standing “O” Marching, The Music of Alex Thode, and SoLee Music. He continues to serve marching arts programs locally as the Audio Caption Head for the Columbians Drum & Bugle Corps and as the Electronics Manager for IMPACT Percussion, a WGI PIO 2022 finalist based in Kennewick, Washington.

Tim is honored to serve the Blue Devils A Corps for the 2022 season on the Audio team.
2022