Tulsa Show Day With The Blue Devils a Big Hit 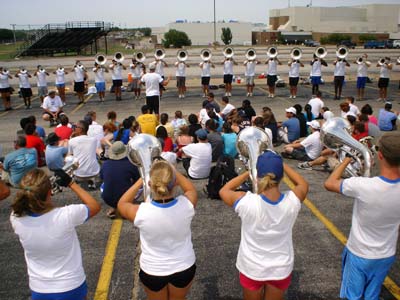 Over 130 students and band directors from 12 high schools took part in this all-day event, taking the opportunity to learn and participate with the Blue Devils as the corps progressed through a show day, culminating with another winning performance in the Drums of Summer competition at Broken Arrow High School.

From marching basics with the corps to playing on a Blue Devil instrument during warm-ups to actually standing inside the corps formations during aÂ  run-through, students and teachers were able to see Â– and participate in - the Blue Devils system of success in a very intimate way.

Band director Barry Harper of Fayetteville High School in Arkansas sent this note after attending the event: Â“My assistant and I were pleased with how much we got out of the afternoon sessions. I have attended numerous clinics by other groups and we often feel like a distraction, but on Tuesday we did not feel that way at all. I want to thank you and the members of the Blue Devils for offering this event! 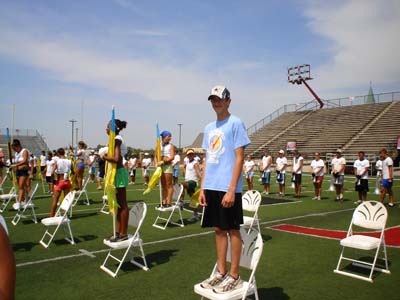 Attendees at the Tulsa event received a System Blue t-shirt, a booklet containing details about the Blue Devils touring operation and then joined the corps members for dinner before attending the eveningÂ’s competition to cheer on their new-found friends in the Blue Devils.

Show Day with the Blue Devils will be presented next in Hattiesburg, Ms on July 22 and then in Buffalo, NY on August 2.