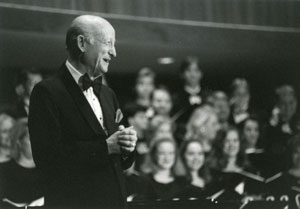 Dr. W. Francis McBeth (1933-2012) was a prolific American composer, conductor and teacher. The popularity of his works in the United States led to conducting activities in forty-eight states, three Canadian provinces, Japan, and Australia. Dr. McBeth served as Ouachita Baptist Universityâ€™s composer-in-residence, Lena Goodwin Trimble Professor of Music and chair of the theory/composition department of the Division of Music. He also served as conductor of the Arkansas Symphony and as Arkansasâ€™ composer laureate, the first composer laureate named in the United States.

His motto was simple. "€œFind one thing in your heart that you really love, and do that one thing really well."€ When Dr. McBeth first began teaching at Ouachita in the 1950s there was no marching band. Being the optimist and exceptional thinker that he was, McBeth went from dorm to dorm asking students if they ever played in a band. If the student answered yes, he offered a band scholarship there on the spot. Dr. McBeth fielded a band that fall and Ouachita has had a marching band ever since.

The Blue Devils is one of the few corps to perform one of Dr. McBethâ€™s compositions. In 1973 and 1974, McBeth'€™s Chant and Jubilo were featured in their season programming. Today, these performance recordings can be found on the Blue Devils website at bluedevils.org. Dr. W. Francis McBeth acquired an extensive list of awards throughout his lifetime. Among these are the Presley Award at Hardin-Simmons University, the Howard Hanson Prize at the Eastman School of Music for his Third Symphony in 1963, an ASCAP Special Award each consecutive year from 1965 to present, in 1988 Phi Mu Alpha Sinfoniaâ€™s Charles E. Lutton Man of Music Award for his achievement and continued contribution to American music, Midwest International Band and Orchestra Clinic's Medal of Honor in 1993, the John Philip Sousa Foundationâ€™s Sudler Medal of Honor in 1999, and Past President of the American Bandmasters Association.

In memory of Dr. W. Francis McBeth, Charles and Susie Kendrick are pleased to award a full scholarship in his name. The recipient of this memorial scholarship possesses the same qualities as Dr. McBethâ€”he leads by example, maintains a joyful attitude â€“ a bit of a humorist by nature, strives for continued musical excellence and possesses the heart of a teacher. The recipient of the Dr. W. Francis McBeth Memorial Scholarship is Perry Reid. 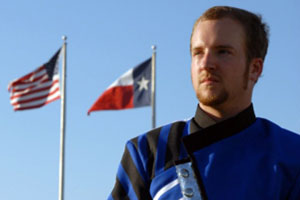 Perry has been a member of the Blue Devils A corps since 2010 and member of a marching ensemble for nine consecutive years. Beyond the corps, he currently studies trumpet performance at Butler University and teaches at Lawrence Central High School in Indianapolis. Perryâ€™s personal qualities embody that of the true Blue Devil. He is positive, professional, adventurous, helpful and inspirational. Perryâ€™s quest for excellence in the marching arena pervades all other aspects of his life.

The Blue Devils are proud to be able to present this award on behalf of Charles and Susie Kendrick and look forward to Perryâ€™s contributions during the 2012 season. Congratulations, Perry Reid!