The Blue Devils are not only bringing their 2012 performance "Cabaret Voltaire" to Minnesota this summer, but also welcoming drummers and student band leaders from across the country to join them for a 3-day System Blue Drum Line and Leadership Camp.

The Blue Devil's System Blue Educational Series Camps began in 2008 with a drum camp in Southern California, and has grown to include over a dozen events in California, Nevada, Colorado, Minnesota, and even Malaysia and Taiwan. 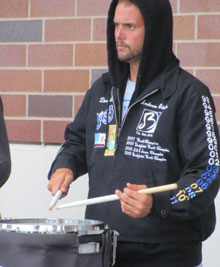 On tap for this July's camp at TCF Stadium on the campus of the University of Minnesota is a Drum Line Camp led by long-time Blue Devil snare drummer and 2010 DCI Solo Snare champion Andrew Odello, along with Stephanie Vasilakis, who gained fame as one of only a handful of women to play snare drum at the elite levels of DCI and WGI.

"I was impressed with the enthusiasm for marching band and drum corps I saw during the two summers I came to Minnesota with the Blue Devils" states Odello. "I'm honored to come back this year and be a part of inspiring these young drummers to excel even further."

To date registrations have come in from across the upper Midwest as well as Florida, Georgia and Texas.

Joining Andrew is Stephanie Vasilakis, who gained renown as one of the top female drummers in the marching activity. Having played snare in the WGI Finalist Ayala High School drum line, she moved on to a great career with the famed RCC Indoor Drumline. Stephanie then spent a summer in the Bluecoats and before aging out as a snare drummer in the Blue Devils.

To top off the drum portion of this years Midwest System Blue Clinic, drummers will spend time with Blue Devil Caption Head and DCI and WGI Hall of Fame member Scott Johnson. Anyone who has spent time with Scott can attest to the level of motivation he inspires in young drummers. Scott will present a Master Class and then give the camp attendees the chance to drum alongside his 2012 Blue Devil drum line.

This year's Midwest System Blue Camp includes a Leadership and Drum Major track. New for 2012, we are excited to present Conn-Selmer Education Director, former award-winning band director and drum major for the 1996 DCI World Champion Phantom Regiment, Jenifer Grice. Jen travels the country presenting leadership and conducting sessions and is regarded for her ability to draw the best out of student leaders.

Teaching alongside Jenifer is Brian Howard, who has the distinction of being a 5-year drum major for the World Champion Blue Devils. When Brian aged out in 2010 he had helped lead the Blue Devils to three gold medals. Brian brings real-life experience as a student leader and conductor and helps the students realize how their role mirrors that of the top DCI student leaders.

"The opportunity to have my student leaders learn from two people who not only each led a DCI corps to the top spot, but were student band leaders themselves and then became accomplished music educators, is one I know they will relate to and cherish" states Murrieta Mesa (California) band director Tom Garvin.

To register for this summer's System Blue Midwest Clinics at the University of Minnesota this July 12-14, and to learn more about this year's teachers, check out systemblue.org