The Blue Devils Mourn the Passing of Fred J. Miller

Fred called Centerville, Ohio his home and at the age of 80, left for a better place on August 3rd, 2012. He was born March 6th, 1932, in Dayton, Ohio, the son of Orville and Betty Miller, who preceded him in death.

Fred graduated from Chaminade High School in 1952, and attended the University of Dayton. He was the director of Bands at Fairborn High School from 1957 to 1968, eventually serving as Music Supervisor for the district. Fred also used his theatrical skills by directing 10 of the most popular musicals of that time.

Considered the â€œMaster Showmanâ€ of the pageantry activity, Fred was a founding member of United States Twirling Association and was the main force behind bringing Winter Guard International Championships to Dayton, Ohio. He founded the Millerâ€™s Blackhawks Twirling Corps that established a record that is unequalled in the twirling world by winning National Championships every year from 1956 through 1968.

Fred was the serving President and CEO of Fred J. Miller Inc., a family owned company established by both Fred and his wife Marlene. Fred touched the lives of thousands through his unique talent and passion. Fredâ€™s smile said it all, he loved to watch an idea come to life, or as the music unfolds to tell a story. There was no man prouder of hard work and dedication. We all feel diminished by the loss of this great man, but will take his positive attitude forward with us. 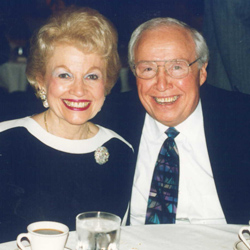 A gathering of friends and family will be held at the Tobias Funeral Home on Far Hills Ave, Centerville Ohio, on Monday the 6th at 5:00-9:00. A Mass will be held Tuesday morning the 7th at Incarnation Church, at 10:00 am.

In lieu of flowers, the family has established the â€œFred J. Miller Memorial Music Education Fundâ€ Donations may be made to any Fifth Third Bank location in the name of Fred.