One Music One World In South Africa

The Field Band Foundation (FBF) is a cornerstone project of the Blue Devil's One Music, One World initiative, which has a goal of creating life-changing experiences through international exchange programs that leverage music to bridge cultural, economic, and musical divides, and establishes lifetime social engagement in youth.

Established in 1997 to serve students from impoverished regions of South Africa and teach life skills through music and marching band, the FBF now reaches over 5,500 students in 46 bands through intensive-ongoing daily outreach, and boast graduates who have found success as educators, business-people and professional musicians and dancers.

The Blue Devil's One Music One World initiative has been successful in bringing awareness to the Field Band Foundation's important work and since 2012 has donated 64 brass instruments, allowing the FBF to add additional bands and give students showing exceptional ability proper musical instruments to excel on. 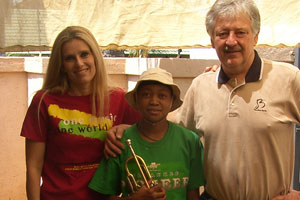 One of the students who have benefited from these donations is Mashadi Mokoena. Long-time FBF supporter Michelle Steenkamp (pictured here with her father Andre Steenkamp and Mashadi) says "The first time Mashadi picked up an instrument was when she joined the Field Band in Cullinan in 2004. She has now been accepted at the North West University as a music major. Her current trumpet is a really beat-up, old second-hand instrument. You have helped Mashadi take one more step towards reaching the stars!"

Blue Devils Executive Director David Gibbs states, "The Foundation's work has a powerful effect on the lives of young people in South Africa and we are definitely honored to continue our partnership. Our mission aligns very much with the mission and spirit of what the FBF stands for."

Gibbs says that supporting the Field Band Foundation is just one part of the organization's broader One Music One World initiative. "Along with supporting the FBF's great work in South Africa, we're working to provide support to youth music programs in communities as wide ranging as inner-city Los Angeles, Eastern Europe and South America with a goal to reach out and partner with programs from all corners of the globe."

Making the trip were Blue Devils Executive Director David Gibbs and his wife Sherrie and children Peyton and Ainsley, Blue Devil Board member Todd Tanji, Board member Rosa Lee Hardin and her husband Kevin Jones, Board Advisor John Oppedisano and his wife Debra, System Blue Live Events manager Pat Seidling and his wife Tamee and Development Director Gail Shultz, all landing in Johannesburg in time for the 2-day Championships event that showcased 13 bands selected through a series of regional events.

To support the Blue Devils One Music One World initiative and learn more about our growing international relationships, check out bluedevils.org/about/omow. 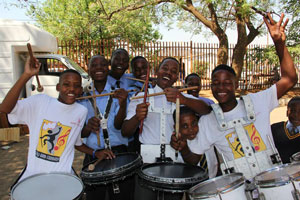 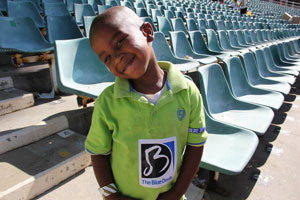 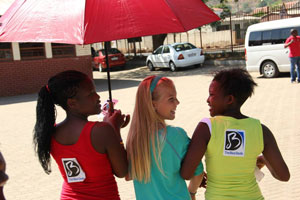 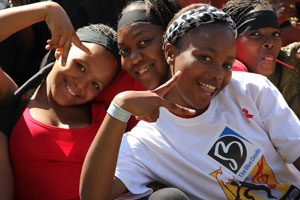