It is with great excitement and gratitude that we welcome Sam Pilafian into the Blue Devil's camp. Sam will be consulting, educating, and collaborating with the brass section and instructors May 28-31, 2014 in Concord as well as August 6-9, 2014 in Indianapolis for finals week.

Sam is the co-creator of The Breathing Gym, used by the BD brass section. He connects with the corps though Kevin Ronan, one of the Blue Devil's main brass staff - an ex-student, and current friend of Sam.

Sam has never worked with the Blue Devils, so this first visit will mainly be a consulting role. He will work with the members and staff on techniques they are currently using. This will be a great learning experience for the corps. Sam has a keen understanding of the drum corps activity, and we look forward to his guidance.

"When it comes to master teachers, Sam Pilafian, is at the top of the list. Behind the scenes, he has been a huge influence on the breathing program we've incorporated at BD. When John Meehan asked me to do some breathing exercises back in 2008, Sam was the first person I called for advice. As busy and famous as he is, he always had time to talk shop," remarks Kevin Ronan.

With Sam as a consultant for the horn line, the members and instructors have an incredible resource on-hand for anything and everything related to music education and performance. The most exciting part of this collaboration is that the brass staff and members of the horn line have a opportunity to work with a legendary musician and educator. 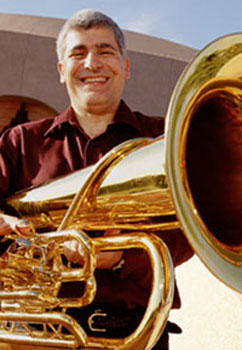 Sam Pilafian, Professor in Practice at the Frost School of Music, University of Miami, and tubist of the Boston Brass, is perhaps best known as a founding member of the internationally renowned Empire Brass Quintet (1971-1993). He has also recorded and performed with the Boston Symphony Orchestra, the New York Philharmonic Orchestra, the Orchestra of St. Luke's, the Metropolitan Opera Orchestra, the Duke Ellington Orchestra, Lionel Hampton, and Pink Floyd.

As a solo jazz artist, Sam has recorded fifteen CDs. His long career has earned him an Emmy(R) for Excellence in Instructional Video Production, the Walt Disney Award for Imagination and Innovation in Design, the Walter Naumberg Chamber Music Award, the Harvard Music Association Prize, the University of Miami's Distinguished Alumni Award, the Brevard Music Center Distinguished Alumni Award, the Robert Trotter Visiting Professorship at the University of Oregon and the annual Outstanding Teacher Award from the Arizona State University.

As an arranger, composer and recording producer, Sam has recently produced and written for Joseph Alessi (New York Philharmonic), the Boston Brass, the Brass Band of Battle Creek, the Academy (of Drum Corp International), and the United States Air Force Band. Sam is the coauthor with Patrick Sheridan of the best selling pedagogy texts and DVD's "Breathing Gym" and "Brass Gym". Professor Pilafian previously served for over forty years on the faculties of Boston University, the Tanglewood Institute, Berklee College of Music and Arizona State University.