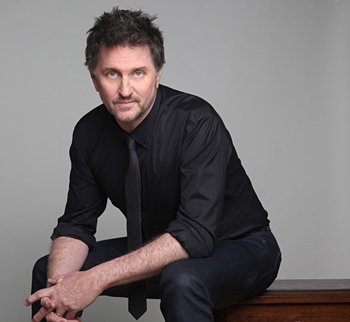 Gordon Goodwin is known for his Big Phat Band, his compositions, and larger than life roll in the big band world. His film scoring includes The Majestic, Glory Road, National Treasure, Remember the Titans, Armageddon, Star Trek: Nemesis, The Incredibles, Hot Rod, Get Smart, Snakes on a Plane, Race to Witch Mountain, Coach Carter, Bad Boys II, Con Air, Gone in 60 Seconds, just to mention a few. (See all his film credits.) Goodwin has also been a guest conductor for such groups as the London Symphony Orchestra and Seattle Symphony Orchestra.

All of this, and he graciously composed the original piece "Circo Campagnia" for the Blue Devils 2014 program Felliniesque.

We had the pleasure of sitting down with Gordon recently to get some insight on the music and his own relationship to drum corps and the Blue Devils.

Blue Devils: What is the main thing you would like the listener to keep in mind when listening to "Circo Compagnia?"

Gordon Goodwin: That's a question with a different answer for each person. Some people enjoy having some foreknowledge about the music they are about to hear, and others would rather go in with a blank slate. I would usually encourage people to listen to any kind of music with an open mind, without any particular expectations. Take what comes on face value - trust the musicians and the composer and go where they lead.

BD: Did you find a big difference in writing for the Blue Devils as opposed to writing for big band?

GG: There's an obvious difference in instrumentation, but in both cases - writing for the Big Phat Band or writing for the Blue Devils - you are dealing with musicians of a high standard. These are musicians with advanced technical skills and a strong work ethic. So I knew that the Blue Devils could execute any musical phrase or concept I might come up with. I knew they were comfortable in a variety of styles. That's pretty liberating for a composer, to go into a project with a minimum of limitations.

BD: Please tell us one of your favorite aspects of the marching world.

GG: To be honest, I used to detest it. My high school experience was pretty frustrating, with the marching band being little more than filler for the halftime show at the football games. The music we played was very conventional and not stimulating to me, I hated the outdoor environment and the way my instrument responded out there. Worst of all was that we were playing for a distracted and disinterested audience. But things have changed greatly these days. The stylistic parameters of the genre have greatly expanded, the playing conditions, while not Carnegie Hall-esque, have also improved, has allowed the musicians to give their best efforts. But best of all, the focus now is on the musicians and the other performers. The people come to watch the show. Hey, maybe someday they'll have football players come and play a few downs between bands at these competitions! Justice!

BD: In keeping with the theme and the other composers of Felliniesque, how much did the music of Danny Elfman, Nino Rota, and Maury Yeston influence your composition?

GG: I can't claim that those composers directly influenced my work here, not in a specific sense. I believe I came on early into the production process, and thus got handed a fairly blank canvas to work with. But I make an effort to listen to as many different composers as I can. There is so much to learn from those great artists.

BD: What will you keep in mind when you see the Blue Devils perform your composition this summer?

GG:It's been several months since I composed my part in the show, so hearing it will be a new experience for me. My writing assignments are such that I don't retain them in my head for very long - I guess I have to make room for the next project. So I don't have any preconceptions. I'll be like everyone else in the audience, discovering and experiencing the show for the first time. I will be interested in observing the staging and choreography and how those elements coexist with the music. I'm also curious how my segment fits in with the show as a whole. But I am grateful to the Blue Devils for creating an environment where young musicians can excel and perform a piece that does not exist anywhere else. That is unique and special, and the kids that participate in the Blue Devils show will not soon forget it. Neither will I.